Login to Use MyBinder Print

Students examine the modern and historical importance of soil erosion in Utah and on the Great Plains during the Dust Bowl. Grades 3-5

conservation tillage: farming methods that reduce the intensity or frequency of tilling in order to maintain some ground cover throughout the year and disturb the soil as little as possible while still providing the conditions needed to grow a productive crop

drought: a long period of time in which there is very little or no rain

graze: to feed on grass

Dust Bowl describes both a time and a place. The dust bowl region of the United States covers the southern portion of the Great Plains, including parts of Texas, Oklahoma, New Mexico, Colorado, and Kansas. But Dust Bowl—with a capital D and B—refers to the time during the 1930s when drought, prairie winds, and poor land use practices combined to make life in this region miserable and farming nearly impossible.

In the early 1900s, gas-powered tractors enabled farmers to cultivate millions of acres and enjoy bountiful harvests. In the southeastern Great Plains, farmers used the newly invented steel plow to dig up acres of perennial prairie grasses and plant annual crops like wheat. When the economy declined in the late 1920s, farmers were forced to cultivate more land to pay their bills. Poorer quality land was tilled, and conservation practices were abandoned to reduce costs. Few recognized that they were setting the stage for mass erosion. In 1930, farmers tilled and planted their fields, but the rains never came, so their crops didn’t grow. The drought continued through the 1930s, leaving acres of dry soil vulnerable to the wind with no plant cover to hold it in place.

On Sunday afternoon of April 14, 1935, clouds of dust moved through the southern Great Plains and turned the sky black. People had to cover their noses and mouths so they could breathe. The day would go down in history as Black Sunday. Robert E. Geiger was a writer for the Associated Press who visited the area during that time. In a series of firsthand articles for the Washington Evening Star, Geiger described “pelting winds full of topsoil” and was the first to call the area the “Dust Bowl.” 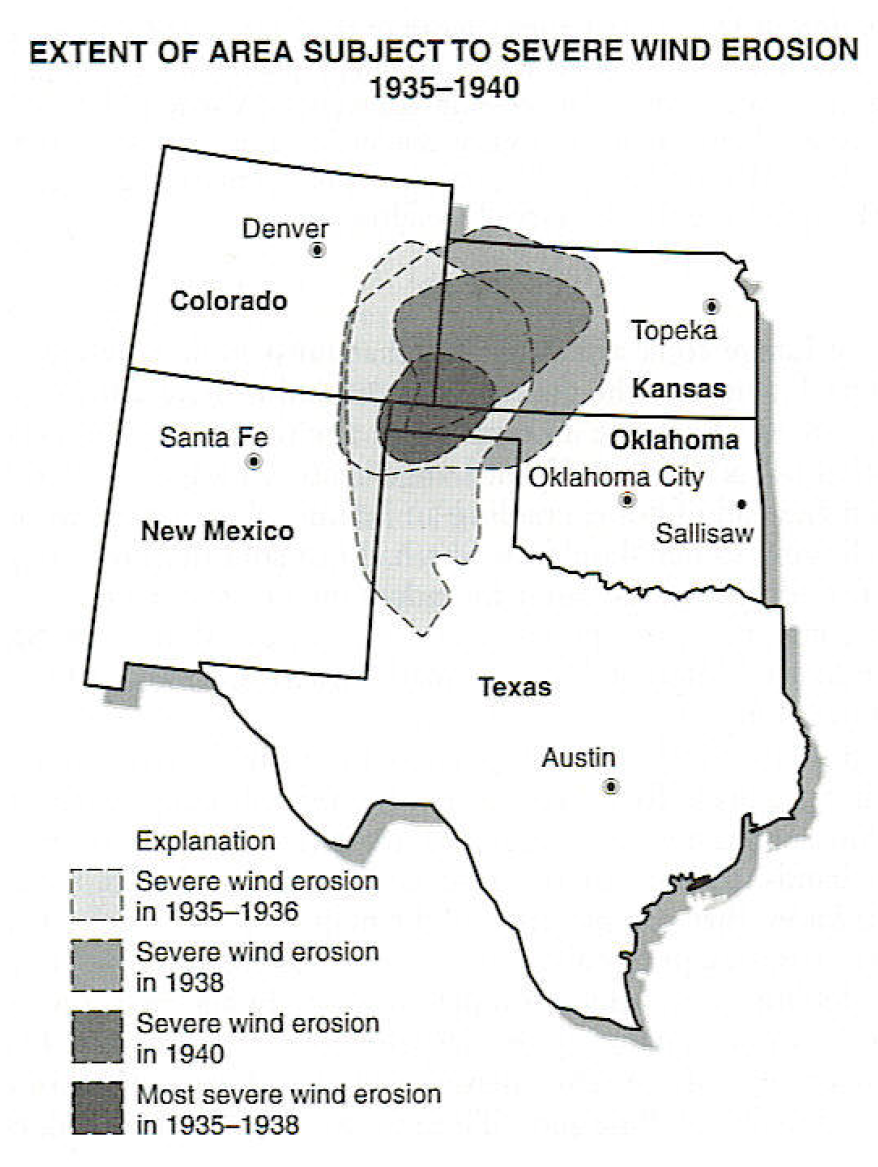 During this same time, Utah had its own centers of soil erosion. Grantsville, located in the heart of the Tooele Valley, suffered dust storms that caused economic and ecological problems similar to those of the Great Plains. Grantsville residents recall the 1930s as dark and dirty. When the Tooele Valley was first settled in 1847, abundant grass covered the valley floor, and the valley quickly became one of the most popular winter grazing areas in the west. Large outside trail herds, making their way to Idaho and Nevada, traveled across the valley, lingering to pick up any available feed. Slowly, the grass disappeared and sagebrush took its place. Overgrazing stunted and scattered the sagebrush until what was once a range of plenty became almost barren.

From time to time, brush fires swept through Tooele Valley, destroying what little perennial vegetation was left. Residents of the valley needed to increase their income. They plowed up many acres that, without irrigation, couldn’t yield crops on the yearly rainfall of 12 inches or less. The wind whipped up small dust clouds, sending them into the city. Then came drought, and that was a recipe for ecological disaster. Suffering from the catastrophe was not confined to Grantsville. Soil from the Tooele Valley settled as far away as Salt Lake City, Ogden, and Logan. Even Idaho got some of Utah’s dust.

In the case of both dust bowls, government actions helped reverse the situation. The Soil Conservation Service (SCS), a special branch of the United State Department of Agriculture that is called the Natural Resources Conservation Service (NRCS) today, was created and went to work. The SCS used carefully planned conservation methods to restore grasses and helped farmers implement techniques like conservation tillage to reduce erosion. Local Soil Conservation Districts were established, which still promote conservation on public and private lands today. As vegetation was restored, farmers and ranchers moved back onto the land. Using improved farming and grazing management practices, agriculture has returned to the Tooele Valley and the Great Plains.

The Dust Bowl is now remembered as one of the worst environmental tragedies in US history. Drought has returned to the dust bowl region over the years, but farmers are prepared. Crop farmers plant wind breaks and use conservation tillage techniques to protect the soil. Suboptimal lands are not used to cultivate annual crops. Ranchers move quickly to remove livestock and preserve as many plants as possible on the range. Livestock can graze on rangelands if they are managed properly, arid lands can be used for agriculture with conservation techniques, and we can learn from our mistakes!

Utah Agriculture in the Classroom

Agriculture and the Environment

CCSS.ELA-LITERACY.CCRA.R.1 Read closely to determine what the text says explicitly and to make logical inferences from it; cite specific textual evidence when writing or speaking to support conclusions drawn from the text.

CCSS.ELA-LITERACY.CCRA.SL.1 Prepare for and participate effectively in a range of conversations and collaborations with diverse partners, building on othersâ ideas and expressing their own clearly and persuasively.